In this in-depth case study of Italian rail rapid transit projects, we investigate how Italian construction costs have changed over time and distill lessons learned to understand how design, procurement, and policy drive costs. We found that on average Italian transit projects cost 57 % less than global averages. Italian costs, however, haven’t always been so much lower. Based on our research we identified four key ingredients to help explain how Italian project costs have become so much lower relative to the rest of the world over the last 30 years. First, a wave of reforms targeting the procurement process in the 1990s prompted greater transparency, accountability, public oversight, and competition. Second, the public sector built and maintained strong in-house capacity to perform the core planning, design, and construction management activities. Third, the widespread adoption of light automated metros starting in the early 2000s, helped reduce station footprints while maintaining high-capacity transit. Finally, Italy boasts an established construction sector with cutting-edge expertise in tunneling and rail infrastructure. 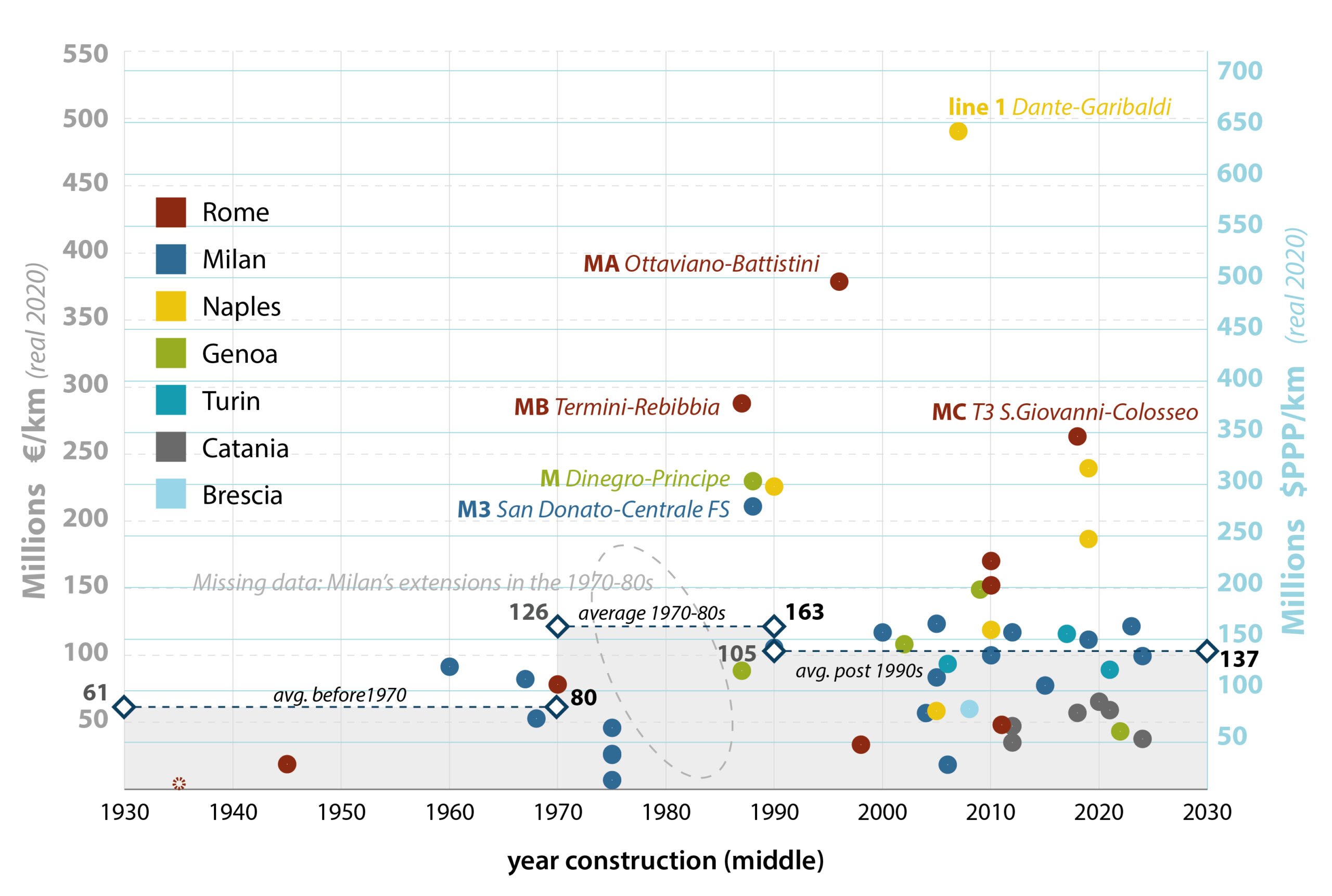 The Italy-specific database encompasses 50 metro rail projects accounting for 307 km or 93% of metro rail mileage built in Italy since the 1940s, currently under construction, or entirely funded and to be completed by the end of the 2020s. The analysis of this expanded country-focused database highlights a generally low average value ($120 million/km) and a high variability between projects and cities, as well as over time: from as little as $22 million/km for Milan’s at grade suburban extension of M2 built in the early 2000s, a cost on par with mainline double track rail, up to the $645 million/km of Naples’s line 1 central segment, the most expensive section of metro ever built in Italy. This variability is the result of both historic trends, differences in local capacity, and Italy’s unique urban morphology.

The development of Italy’s project-delivery framework offers a few fascinating lessons, both positive and negative, for countries that want to tackle the upward spiral of transit project costs. A growing concern for cost control since the 1990s facilitated the implementation of mechanisms, tools and institutions designed to curb waste, and avoid mismanagement and corruption-prone practices in public-works delivery. In the aftermath of these reforms, three main innovations revamped transit-project delivery. First, a new anti-corruption authority (ANAC) was established to clean up public procurement practices. Second, Italy adopted official reference unit-price lists to determine the benchmark cost of procurement and the bid ceiling. Third, the bidding process was overhauled to incorporate technical scores when assessing a bid rather than focusing exclusively on costs. On the other hand, it is worth noting that, despite a planning and approval process managed by the civil service and less prone to external lawsuits and NYMBYism-induced design, the Italian institutional framework suffers from important veto points and political meddling than can increase the cost of delivering infrastructure in particular contexts, notably historic city centers subject to strict heritage protection.

The four in-depth cases presented in the second part of our study examine metro projects built in Turin, Milan, Rome, and Naples over the last twenty years. We rely on interviews with public officials, engineers and experts, the analysis of official documents and data provided by transit agencies, as well as reports from national supervising authorities and articles from the industry press to identify specific projects’ cost drivers. Each city offers insight into the benefits and challenges of different delivery methods, variations in local capacity, urban contexts, and diverse financing structures.

Rome’s case draws attention to the dangers of political uncertainty and to the cascading effects on costs triggered by an insufficient level of planning and design prior to procurement, especially in challenging historic environments.

Sharing with the capital city a difficult densely built old context, Naples’s case boasts the most expensive metro section ever built in Italy. Its costs grew because of an opaque, non-competitive Design-Build procurement model with weak public oversight, the inclusion of bespoke stations designed by starchitects, and challenges of building in dense historic urban core with extremely challenging geology.