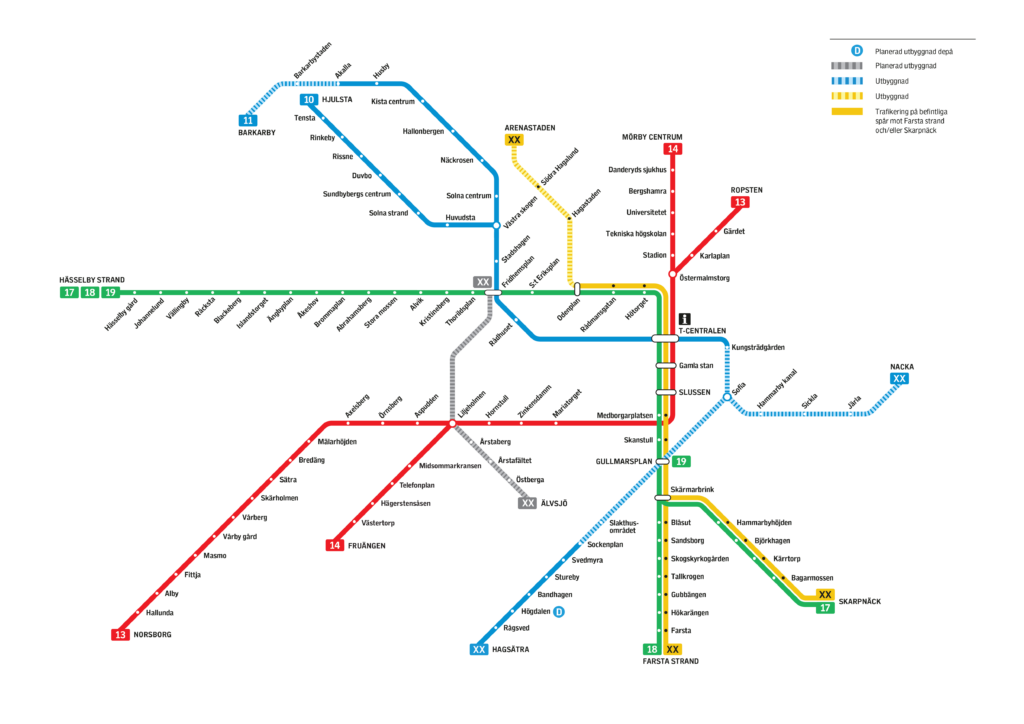 Stockholm County is a region of 2.5 million people. Despite its modest size, it has one of Europe’s busiest urban rail networks: in 2019, on the eve of the corona crisis, the 104 km Stockholm Metro (Tunnelbana or T-bana) network carried 1,265,900 riders on an average weekday and including the region’s commuter and light rail networks the system carried 1,892,300, representing comparable ridership per capita to large, established European transit cities like Paris and Berlin. The modal split for all trips in 2019 was 40% car, 30% public transport, 28% biking and walking (SL Annual Report 2019), representing one of the highest shares for public transport in Europe. The system is currently in the middle of a large expansion wave: the commuter rail tunnel Citybana opened in 2016 and the system is currently carrying 410,300 passengers a day, while the T-bana is currently building about 19 kilometers’ worth of extensions, collectively called Nya Tunnelbanan.

The urban rail expansion program in Stockholm is an instructive case. The construction costs remain fairly low. Citybanan cost SEK 16.8 billion in 2007 terms, or about $2.4 billion in 2020 purchasing power parity (PPP) terms, averaging $320 million/kilometer; this is slightly more expensive than the global median, but Citybanan was an unusually complex project, built entirely underneath city center, with two large station caverns mined under older T-bana platforms. Nya Tunnelbanan is currently projected to cost SEK 32 billion, about $190 million/km, well under the global median. Alongside the other Nordic countries and perhaps Switzerland, Sweden is the only country among the world’s very wealthiest with construction costs this low: other low-cost countries such as those detailed in the reports about Italy and Turkey are on the economic periphery of the developed world.

The quality of in-house designs under the civil service system is high. The Swedish Traffic Administration, or Trafikverket, has a generations-long tradition of apolitical engineering, and decisions about the construction of small road projects are undertaken on the basis of benefit-cost analysis. Rail megaprojects like Citybanan and Nya Tunnelbanan cannot be so reduced – they cost so much that the elected national government must approve the final plans, and yet it has not politicized those plans. The in-house expertise of Trafikverket cascades down to the regional level and incorporates a procurement strategy that centers public-sector expertise; designs are traditionally done by the public sector, with the assistance of private consulting firms, and are subsequently owned publicly and bid out to private construction firms.

And yet, there is danger that the low Nordic costs are rising. Nya Tunnelbanan has had a large cost overrun, from SEK 23 to 32 billion. The cost of Helsinki’s West Metro (or Länsimetro), opened 2017, was only $130 million/km in 2020 terms, but this was more than double the cost when the project was approved in 2007, and the second phase of the West Metro is costing $230 million/km. Oslo’s under-construction Fornebubanen with its deep-mined stations is projected to cost $300 million/km (2020 PPP terms), triple the cost of Lørenbanen, which opened 2016.

Moreover, the Nordic civil service is showing long-term interest in changes in procurement in a direction more akin to what is found in the English-speaking world. Academic and gray literature within the Nordic world, and not just Sweden, speaks favorably of reforms that reduce public-sector involvement; Trafikverket’s new strategy is that it should become “a pure client” and implement a system that centers private-sector expertise and innovation.

The long-term changes are unlikely to be positive. The one-time increase in cost of Nya Tunnelbanan appears permanent: future metro expansion is likely to have similar per-km cost to Nya Tunnelbanan, Fornebubanen, and the second phase of the West Metro, rather than to the original budget for Nya Tunnelbanan or the actual cost of Lørenbanen or the first phase of the West Metro. The English-speaking world has high construction costs, and yet the academic and gray literature out of the Nordic world looks up to it and ignores low-cost construction within Southern Europe, which Northern Europe looks down on.

Nonetheless, construction costs in Sweden, Norway, and Finland, remain well below the world average; nowhere else in Northern Europe are construction costs so low save perhaps Switzerland, and costs in Germany, the Netherlands, and the United Kingdom are a multiple of those of Sweden.